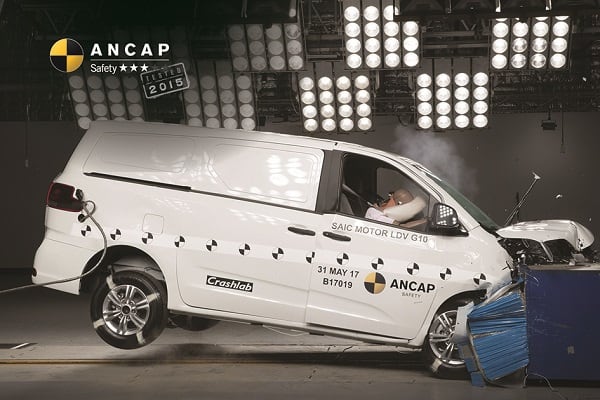 The Australasian New Car Assessment Program (ANCAP) has handed down a three-star safety rating – described as ‘a disappointing result’ – for the LDV G10 light-commercial van.

Applying to all petrol and diesel variants sold in both Australia and New Zealand from mid-2015, the three-star rating for the Chinese-built van is the same ‘below-par’ level, as ANCAP describes it, reached by LDV’s larger V80 van (that is, short-wheelbase low-roof models built from September 2015), which have electronic stability control fitted standard.

A separate two-star rating applies to earlier V80 models that do not come with ESC.

ANCAP chief executive James Goodwin said commercial buyers such as tradespeople – who are a key target audience for the G10 – were being “let down” by LDV’s vans in terms of both structural integrity and safety equipment specification.

“There were a number of serious concerns with the G10’s structural performance, with the driver footwell rupturing and excessive pedal movement,” he said.

“Steering column and dash components were also a potential source of knee injury for the driver and passenger.

“The G10 also lacks important safety features such as head- and chest-protecting side airbags and seatbelt pre-tensioners which consumers today expect to be provided as standard.”