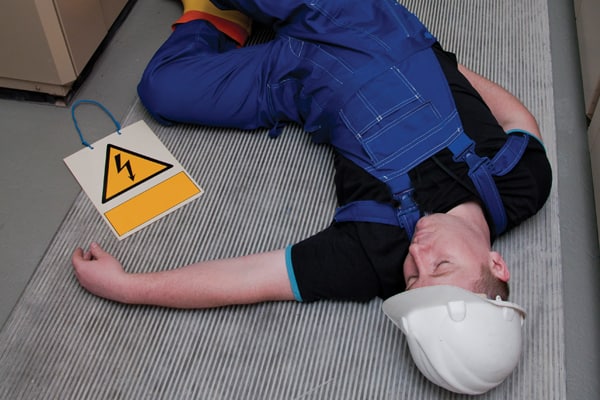 Tiny electrical signals are crucial to the workings of the human body. George Georgevits outlines what happens when a large voltage comes charging through.

Most of us have experienced some form of electric shock.

One common type on a dry day is the zap from a car door after you slide out of the seat.

Other types of shock have serious consequences and, under some conditions, can even be fatal.

Electricity flows in a circuit or loop, and current in the circuit is governed by the circuit elements, namely the source voltage and the circuit resistances.

These are related by Ohm’s law: V = I x R, where V is the source voltage, I is the current flowing and R is the total circuit resistance.

Effect on the body

When electricity flows through a body that has become part of the loop, it must have (at least) two points of contact – an entry and an exit point.

In general, it is only the parts of the body that lie between these two points that are affected by the flow of current.

When taking off a jumper made of synthetic materials in a dark room, I was amazed to see sparks about 100mm long. Dry air has a breakdown strength of about 1,000V/mm, so there was about 100,000V between different parts of this jumper.

Yet I felt nothing, because electric shock is caused by the amount of current flowing through the body, not the applied voltage. The voltage was high, but the current was negligible due to the very high circuit resistance.

The human nervous system uses impulses of current for communication and to operate parts of the body.

When you grip something with your hand, a train of tiny current pulses is sent down the relevant nerves to operate the muscles – typically five pulses per second. When you grip harder, the pulses become more rapid.

Imagine you have come into contact with, say, a electrical appliance with a metal case that has become live due to a wiring fault. If you happen to be standing barefoot on a conductive surface (eg: a concrete floor) and you grasp this drill, a substantial 50Hz current will flow through your body between your hand and your feet (the entry and exit points).

This current is much larger than, but in many ways similar to, the signals that usually appear in your nerves to operate muscles in your hand. This 50Hz signal will override the control signals from your brain and cause the hand muscles to contract tightly. You can’t let go because the brain’s signals have been swamped.

This 50Hz signal is likely to interfere with other muscles that lie in the current path, some of which are essential for keeping you alive (heart, lungs, etc).

If someone tries to pull you away, they are likely to suffer a similar fate, because they will become part of the conductive path. If they are wearing some form of insulated footwear and/or insulated gloves, they may have a chance.

However, the capacitances involved may still permit enough AC current to give them a shock. For this reason, it is essential to turn the power off as soon as possible – before trying to help.

Even a mild electric shock may cause a violent, unintended movement. Then there’s the possibility of physical injury due to falling off a ladder or being ‘thrown’ back from where you got the shock.

In reality, you are not thrown – your affected limb muscles operate in an uncontrolled manner due to the flow of current through your body.

A normal circuit breaker or fuse is intended to protect fixed wiring circuits against overloads and short circuits.

Trip-out currents typically range from 8A for lighting circuits up to 20A for most power circuits. However, these ratings are much too high to protect anyone coming into contact with a live conductor.

In terms of sensing an electric shock, a 50Hz AC current of a milliamp or so is about the lower limit of our perception. Much above this quickly becomes unpleasant and can cause injury.

Most 240V fixed wiring in premises is fitted with some form of residual current device (RCD). This is now required by the Wiring Rules for new installations (but not lighting circuits and some special purpose circuits).

The RCD senses the ‘go and return’ current in the circuit’s active and neutral conductors. If the two differ by more than the rated trip point of the RCD, it assumes the difference in current is flowing through a person due to a fault. The circuit is then disconnected in much the same way as with a fuse or a normal circuit breaker.

RCDs are generally set to trip about 30mA current difference within about 0.3 seconds. The current level and trip time have been determined as a reasonable compromise between nuisance circuit tripping and personal safety. Faster trip times apply for larger current differences.

Occasionally, people come into contact with the distribution network service provider (DNSP) side of the electricity network.

This can be in the form of the incoming 240/415V mains (eg: where the power comes in to a main switchboard), or with 11kV and higher voltages, as found in the distribution and transmission parts of networks in the street.

The danger with coming into contact with any part of the distribution network is that the circuit is protected only by a fuse or other protection equipment back at the feeding substation transformer. Such protection devices are typically rated at several hundred amps, offering little or no personal protection.

Some voltage must always be present for current to flow, as it is voltage that drives current around the circuit. Higher voltages will drive a higher current for a given circuit.

If the voltage is sufficiently high. and a live conductor comes into contact with the human body, the person will receive an electric shock. Also, tissue damage can result from arcing and from Ohmic heating in the parts of the body where the current has passed.

Furthermore, body parts vary in their ability to conduct electricity, so the tissue damage will not be uniform along the current path.

The current will keep flowing until the person is physically removed, thereby breaking the current flow, or the supply is switched off by the utility.

This is why such low impedance sources of high voltage must always be treated with the utmost care and respect.

If such a service is accidentally short circuited, a very large fault current flows (1,000A or more). So, a large amount of power is dissipated in the fault until the circuit protection operates.

People nearby will be subjected to a blinding arc flash and loud bang. Personal injury can result from ultraviolet radiation burns to exposed skin, eyesight damage from the arc flash, wounds due to fragments of flying molten metal, acoustic shock caused by the arc, and electric shock.

In addition, long-term psychological trauma may arise from the event.

Note that when an incident involves a phase to earth fault, despite the apparent severity of the fault, electric shock may not occur. This is because the active conductor is effectively grounded by the fault, so there is insufficient voltage to drive a harmful current through the body, particularly if the fault is caused by someone operating an insulated power tool (angle grinder, drill. etc).

In conclusion, it pays to always check that a circuit is dead before starting work on or near it.