I’ll follow the sun: PV panels that track the sun 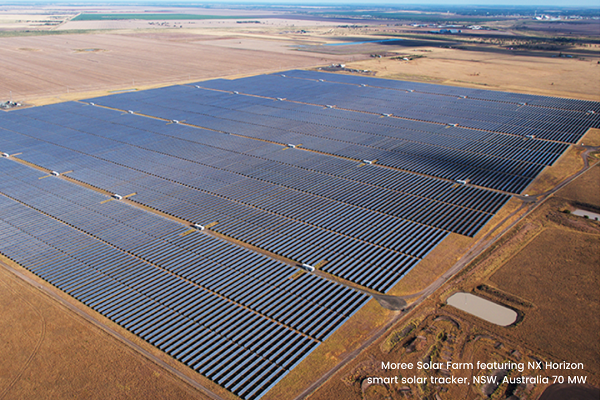 A Queensland solar farm has installed a Nextracker solution which, just like the Beatles song title implies, follows the sun. Sean Carroll finds out more.

Australia’s largest solar farm (for now) in Queensland’s Western Downs, contracted to CleanCo in conjunction with Neoen and Sterling & Wilson, will utilise the Nextracker NX Horizon solution which follows the sun throughout the day, maximising the PV yield.

Western Downs is a 460MW-peak solar farm which is set to be completed by the first quarter of 2022 with the Nextracker smart solar trackers installed in 2021. Boasting 150MW of battery storage potential, it will give Queensland a substantial amount of clean power andcreate 400 jobs.

In this particular farm, a 1.5% gain as a result of the Nextracker technology would give operators over 15GWh per annum or enough to power an additional 3,000 homes according to independent testing in Nextracker’s Center for Solar Excellence in the United States.

“Within Australia, we see almost all utility power projects selecting tracking technology unless there’s a project-specific reason why tracker isn’t feasible at that site, and this would apply only to extremely corrosive or high-wind sites where the tracker isn’t possible,” he says.

“It’s able to do that because of its design as a balanced tracker, meaning the point of rotation is in the middle of the
tracker row and it’s elevated up above where the modules sit,” James explains.

“That means that it doesn’t require much power to track from ±60° and it’s also a self-powered tracker, so it has its own smart PV module next to the motor in the middle of the row to power the controller and the motor.”

Nextracker technology also comes with forms of weather resistance which are particularly useful where it’s located in Queensland with its potential for harsh weather.

“Large scale, ground mounted solar systems are essentially 2m sails that are installed about 3m off the ground and up to about 100m in length. It’s a structure which can be extremely susceptible to the wind dynamic effects because it’s essentially a long sail that tracks throughout the day and so, this makes factors such as system intelligence and defensive control capabilities critical in the mitigation of severe weather damage,” James explains.

Nextracker has worked with wind engineering consultants CPV and completed a number of wind tunnel studies, looking at how weather affects the panels. Following the findings and modelling studies, the company has designed their tracker to respond accordingly.

“We provide wind sensors for our sites, so they’ll automatically measure the wind speed and direction and then we have a safety wind stowing position where the trackers will move into the safest possible position in the event of high winds to mitigate these effects,” James says.

“We also have a software offering which is more for asset owners called NX Navigator and that’s a tool which can be used to also stow the site into defensive positions in the event of thunderstorms and hail.”

The NX Navigator software would’ve been very useful following strong storms in North Queensland not long before speaking with Electrical Connection. No other tracker system provides plant operators with so much actionable, granular information about plant status, with 13 data points collected every five minutes for every network- connected tracker row.

In terms of what’s next, the Nextracker technology will continue to grow with the booming solar industry.

James adds that while the company’s trackers were initially for 300W modules, they’re now up to 600W and it’s about adapting to the changing power, size and efficiency: “For mounting suppliers, that has certainly kept us on our toes in terms of keeping up with those changes in the PV module market, and I think that’s one area where our product is continuing to change quickly to be able to cater to the very
large modules which are on the horizon, taking us closer to 800-1000W per module.”