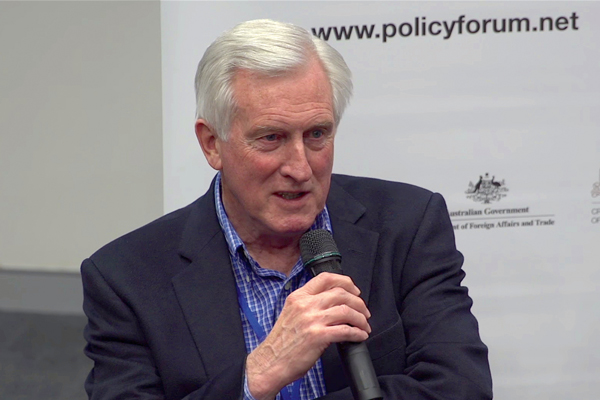 Dr John Hewson AM, former leader of the federal Liberal Party, tells Electrical Connection that Australia is trapped in a policy vacuum as the rest of the world transitions to renewable energy systems. John Power reports.

For the past 30 years, former federal politician Dr John Hewson has championed a businesslike, strategic and orderly transition to renewable energy – an obvious and inevitable reform in the world’s fight against climate change.

And for 30 years, he says, he has been frustrated and staggered by Australian politicians’ inability to consider, let alone facilitate, renewable energy reforms. Indeed, Australia still lacks an energy policy framework within which emerging renewable energy technologies and businesses might operate.

It’s an incredible state of affairs, Dr Hewson laments, particularly when the rest of the world has transcended debates about ‘whether’ to embrace renewable energy infrastructure, and is now more concerned about ‘how’ the transition away from fossil fuels should be implemented.

Dr Hewson, in his professional capacities as an ambassador for the Smart Energy Council, honorary professor at the Crawford School of Public Policy in Canberra, and chair of the Business Council for Sustainable Development Australia, among myriad other appointments, says Australia is entering into a new post-fossil fuel era without any sense of direction.

According to Dr Hewson, there is no doubt that mainstream energy production derived from fossil fuels, particularly coal, is dying.

“An Intergovernmental Panel on Climate Change (IPCC) suggests that all coal-fired power generation should cease by 2050,” Dr Hewson says.

“In our case, we know the existing lifespans of our own [Australian] coal-fired power stations goes through to the early 2040s.”

While coal-fired power generation became popular in the 20th Century due to its apparent affordability, Dr Hewson says, today’s renewable energy systems are already cheaper and cleaner than coal, which means there are no rational economic or operational reasons for the continued use of coal over the medium-to-long term. Specifically, he believes many existing coal-fired stations have only remained viable due to their sale “for very cheap prices” to the private sector, effectively subsidising their capital costs.

In this context, he says, our head-in-the-sand stance to the phasing out of coal, supplanted by short-term political games and poor leadership, is both confusing and embarrassing.

“It’s really about leadership,” he stresses.

“You’ve got to have people prepared to stand up and say, ‘I don’t want to play this short-term game anymore – this doesn’t make any sense’; we have one of the highest levels of emissions per capita in the world, and we are the second-largest exporter of fossil fuels in the world!

“If you look at most of the surveys about climate change, 65%–75% of Australians consistently argue for a significant government-led response to climate change… but those sorts of numbers have been ignored,” he says, adding that politicians are usually eager to gratify the will of a clear majority of voters.

“But no, they ignore it, they play games with it.”

In contrast, Dr Hewson cites the UK’s recent cooperative approach to the uptake of renewable energy, whereby the Labor, Conservative and Liberal Democrat parties reached tri-partisan agreement to transition away from coal. Denmark, similarly, despite its robust and adversarial political system, was equally capable of reaching multi-party accord on the switch to renewable energy.

The absence of a policy framework for the adoption of renewable energy is already causing immense harm, Dr Hewson warns, and the long-term consequences for future development of wind and solar energy production, distribution and storage are dire.

While small-scale solar energy, in particular, has been embraced both domestically and commercially for private and community-wide applications (a quarter of all homes in Australia are now fitted with solar panels – the highest penetration per capita in the world), our lack of a centralised energy policy framework becomes particularly problematic when larger-scale renewable energy infrastructure is considered.

As Dr Hewson points out, there are no legislative or regulatory guidelines in relation to:

These sorts of issues are not merely hypothetical, Dr Hewson says: “For instance, there is a big [renewable energy] project in South Australia which is all done in terms of having identified EPC (engineering, procurement and construction) contractors, and the technology is owned and controlled and everything is ready to roll. But the project can’t get grid connection because ElectraNet, which is a foreign-owned entity, won’t give early or cost-effective connection! So you’re at the mercy of somebody else. Now those sorts of issues definitely should not happen.”

In addition, Dr Hewson says is aware of problems with the quality of some solar energy systems being sold in Queensland, and there are also major hurdles relating to the financing of renewable energy projects, which rely on long-term contractual arrangements in a stable policy environment as a prerequisite for approval.

Even at a domestic level, the lack of an energy policy means energy network providers are able to set and control their own feed in tariff rates without oversight, and set caps on the amount of surplus domestic solar energy that can be directed into the grid.

There is a tendency in current Australian politics to cross bridges when we come to them, Dr Hewson says. This ad hoc approach might solve simple problems, but in complex matters like renewable energy – which involve elaborate webs of interconnected technologies and industries – planning is essential.

Without planning Dr Hewson concedes, we might blunder our way towards the right balance of renewable energy infrastructure and corporate ethics over future generations, but the price of haphazard trial and error will be horrific.

“What you end up is far more disruptive, it tends to take longer, and it tends to cost a hell of a lot more than it would have done if you just had a stable medium-term structure within which people made sensible investment decisions.”

The other important consequence of political apathy on matters like renewable energy, he suggests, is community unrest: “I argued that the Wentworth by-election was a referendum on climate policy, and it was. The Liberal Party lost a blue ribbon seat and they still aren’t listening.”

This disaffection, he adds, can only embolden independents and erode the power of the major parties.

“You’ll get strong independents who will hold the balance of power in both houses,” he speculates.

“If they were to sit back and say, ‘I’ll support good government and genuine policy reform in the national interest’, and oppose all the stunts and games, I think we might get better government out of that system than we get out of the two-party system!”

In the meantime, Dr Hewson encourages private citizens to continue to adopt domestic-scale renewable energy, particularly solar technologies. Who knows… perhaps our political leaders will heed their example one day.

The heat is on for the thermal ...

WorldSkills competitors all set for Kazan