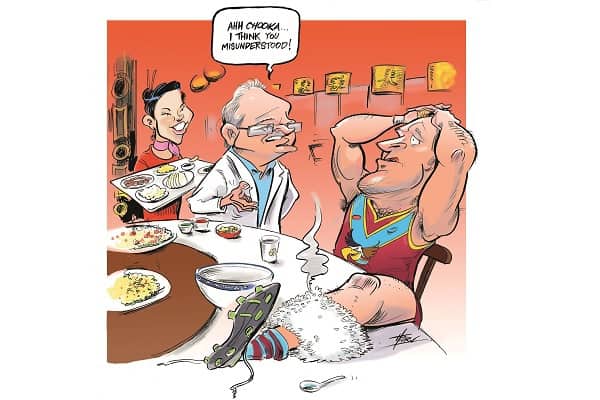 To ice or not to ice, that is the question. Whether ‘tis nobler in the mind to apply heat…

Apologies to Shakespeare, but there is often uncertainty about what to immediately do about a soft tissue injury sustained by the weekend warrior in their quest for health and fitness. I greatly commend each and every bloke who pounds the pavement, rotates the wheel, makes waves, chases leather or throws around heavy metal but, unfortunately, injuries can also occur and it is critical to know the basics of initial sports injury management. By doing the correct things first, recovery will be quicker and, hence, return to exercise and health expedited.

The injuries that I am talking about are the sprains, strains, tears and bruises to the soft tissues surrounding the joints which move our bodies. These tissues include the strap-like ligaments holding our joints together as well as the fleshy muscles and their rope-like tendons that pull the joints through their range of movement. They may be injured by an abnormal force going through them, for instance when the ankle moves suddenly sideways in an acute ankle sprain. A sudden change in direction or a forceful push-off may result in the tearing of a hamstring or calf muscle, or a direct blow may cause muscle bruising in the instance of a corked thigh muscle.

Acute pain is the first thing that is generally felt with these types of injuries. There may be other sensations felt which I term the ‘Rice Bubbles Symptoms’ – various snap, crackles and pops. These can indicate a more serious injury as in the case of the pop that is felt when the anterior cruciate ligament snaps in the knee. The main harmful thing that happens inside in most of these instances is bleeding. As the soft tissues are torn or squashed, the little arteries and veins within them are also torn and ruptured, spraying blood into places it shouldn’t be. This causes acute swelling and pressure which is exacerbated by the fact that the body triggers off an inflammatory response due to the injury and inflammatory fluid puffs up the injury site. The swelling adds to the initial pain.

The mnemonic RICE still stands the test of time when dealing with what to initially do with an acute soft tissue injury. I think that a 24-48 hour time frame is sufficient for the RICE regime to work within – the shorter time for less serious injuries and the longer time if more bruising and swelling is evident. Some recommend doing this regime up to 72 hours.

RICE stands for Rest, Ice, Compression and Elevation. Some add an R for Referral or a D for getting a Diagnosis, meaning go and see an appropriate health care professional to get a diagnosis of the injury as there may also be a bone, nerve or other injury involved. I also like to tell my patients to avoid HARM in the first 24 to 48 hours. This stands for Heat, Alcohol, Rubbing and Movement.

So what are the practical aspects of these mnemonics?

R=REST: Rest refers to resting the affected part. This may mean the use of crutches for lower limb injuries or a sling for an arm injury. In the acute situation, a make-shift sling for the arm can be made by folding up the injured person’s shirt or jumper under and over the elbow. An injured leg can be immobilised by splinting it to the other leg using a belt or item of clothing. Resting the injured area will reduce pain and also reduce any further bleeding from the damaged arteries and veins.

I=ICE: Ice or something very cold like a bag of frozen peas may be used. It is important not to put the ice or the cold article directly onto the skin but wrap it in a wet tea towel or put it in a plastic bag. I recommend applying the cold for no more than 10 to 15 minutes every two to three hours. For fingers and toes, 10 minutes is enough as you don’t want to shut off the blood supply for too long as it may starve the skin of blood causing it to die. Ice slows the flow of blood through the damaged blood vessels which reduces bruising and swelling, as well as having a pain-relieving, numbing effect.

The only part of the body that I have misgivings about applying ice to is the spine. For strain type injuries to the neck or spine I think that applying cold may be counter-productive as the joints of the spine are covered by several layers of muscle. If you put cold on a muscle then it contracts or spasms which then squeezes the bones of the damaged joint together. Hence, for neck and back strains, I recommend heat from the beginning.

C=COMPRESSION: By exerting an external pressure using a compression bandage, the swelling can be reduced which will also reduce pain and help shut down the leaking, damaged blood vessels. There needs to be some give in the dressing, as a dressing that is too tight when combined with the swelling, may totally block off the blood going to the injured limb. A firm elasticised wrap-around bandage or a pull-on sleeve-like bandage such as Tubi-Grip® is suitable. I don’t recommend leaving it on overnight when the limb is continually elevated.

E=ELEVATION: Getting the injured part above the level of the heart helps to reduce swelling. So putting an injured leg up on a pillow when lying down may help. A sling, when mobile, may help swelling in an injured arm but be aware that the bent elbow squashes veins and will probably contribute to swelling so when sitting or lying down, the injured arm should be straightened and elevated up on a pillow.

Over that first 24 to 48 hour period, as well as following the RICE regime it is best to avoid HARM…

H=HEAT: Warmth causes the arteries and veins to dilate up with more blood. If those blood vessels are damaged, all that will happen is that the extra blood will leak out into the damaged tissue causing more swelling, pressure and pain.

A=ALCOHOL: Alcohol also causes blood vessels to swell up so it is a bit of a no-no after an injury. Think of it as forced AFD’s (Alcohol Free Days).

R=RUBBING: Rubbing and massage causes heat and the damaged blood vessels will just leak more blood. There is a time and a place for this important treatment modality but early on it is best to be put it on hold.

M=MOVEMENT: To move, you require blood, and that is the last thing that a damaged area of the body wants immediately after an injury. Rest!

After 24 to 48 hours of the RICE regime and avoiding HARM, it is then time to get the blood back into the injury site in order get the healing factors in and also clean up the mess that is there. Thus, heat is now the order of the day as it promotes an increased blood supply. This can be done by applying hot packs (careful not to burn yourself) and rubbing in very gently, bruise dissolving potions such as Hirudoid ointment or an anti-inflammatory potion such as Voltaren gel. Hot packs may be in the form of the old fashioned hot water bottle (do they still exist?) or a micro-wave heat-pack. I don’t think that it matters greatly what is rubbed in as I think that it is the rubbing or massage that probably helps the most. But, it must be gentle. There is no point having the injury rubbed and causing pain as this means the pressure is too strong for the underlying blood vessels to cope with and it will only result in more bleeding and swelling. As time moves on and pain diminishes then the intensity of massage can gradually increase.

Pain can also be managed with pain-killers in the form of either Paracetamol or a simple anti-inflammatory such as Ibuprofen or their stronger combination varieties with added codeine (Panadeine) or (Nurofen Plus). Once pain is settling, then stretching becomes an important treatment modality as damaged tissue has a tendency to contract and shorten as scar tissue invades the battle zone. Stretching with heat applied helps muscles to relax which maximises the stretch.

A lot of the initial management can be undertaken by the patient but depending on the severity of the injury it may be wise to see a health professional for a diagnosis and further treatment, especially if the condition persists and becomes chronic. As a doctor, I have the added power to be able to order the appropriate investigation such as an X-ray, Ultrasound or a Scan (CT or MRI). That’s why I like the mnemonic RICED, with the D, meaning, go to your Doctor to get a Diagnosis. With a proper diagnosis the correct treatment can be directed at the injury and the road to recovery and health shortened. The warrior can then return to the battle!