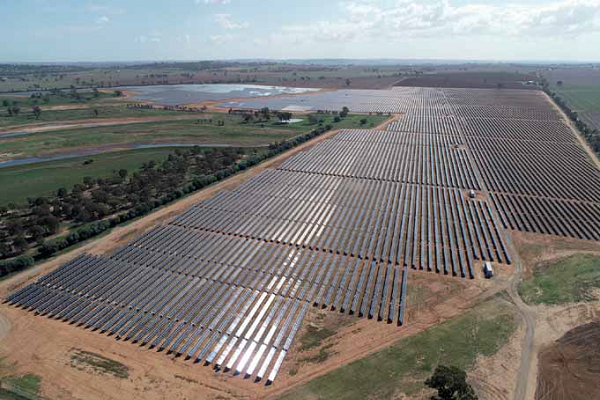 The City of Sydney has been powered using 100% renewable electricity, generated from wind and solar farms in regional NSW since July 1. This is a big win for sparkies as ongoing investment in renewable generation projects, such as this, will continue to support the electrical industry, as well as a variety of sectors and specialists involved in bringing these complex projects onto the grid. Electrical Connection finds out more.

Valued at over $60 million, it is the biggest green energy deal of its kind by a council in Australia.

All the City’s operations – including street lights, pools, sports fields, depots, buildings and the historic Sydney Town Hall – will now be run on 100% renewable electricity from locally-sourced clean energy.

The switch is projected to save the City up to half a million dollars a year over the next ten years, and reduce C02 emissions by around 20,000 tonnes a year – the equivalent to the power consumption of more than 6,000 households.

“We are in the middle of a climate emergency. If we are to reduce emissions and grow the green power sector, all levels of government must urgently transition to renewable energy,” Clover says.

“Cities are responsible for 70% of greenhouse gas emissions worldwide, so it is critical that we take effective and evidence-based climate actions.

“This ground-breaking $60 million renewable electricity deal will also save our ratepayers money and support regional jobs in wind and solar farms in Glen Innes, Wagga Wagga and the
Shoalhaven.”

“This is a landmark achievement for the City of Sydney. If organisations can follow in the City’s footsteps, a net-zero carbon future is achievable,” Matthew says.

“The City is directly matched to these renewable projects, a move that supports the integration of renewables into the system.”

Around three-quarters of the power will be wind-generated, and the remaining quarter by solar.

The project will see the City source renewable energy from three different generators: the Bomen Solar Farm in Wagga Wagga, Sapphire Wind Farm near Inverell and the Shoalhaven solar farm
in Nowra.

The Shoalhaven project is being developed by Flow Power in partnership with local community group Repower Shoalhaven, a not for profit volunteer community enterprise that develops community solar projects. On completion, the 3MW Shoalhaven solar farm will have around 10,000 panels and generate enough energy to power 1,500 homes.

“Shoalhaven solar farm could not have become operational without the City’s investment. By partnering with this project, we’re creating local jobs and helping the renewables sector grow,” Bob says.

“The City of Sydney decision to include a regional community-based scheme brings us a step closer to a sustainable decarbonised future while supporting regional investment and employment. We congratulate the City for this significant commitment.”

“These projects generate regional employment opportunities in construction and ongoing operational phases, and support investment in these communities. At Coonalpyn and Streaky Bay Solar Farm in South Australia, we expect both projects to employ up to 60 workers in peak construction stages,” he says.

Owned by the Australian-listed company, Spark Infrastructure, the 120MW Bomen Solar Farm has more than 310,000 solar panels on 250 hectares of land. It is one of the first projects in Australia to use bi-facial panels that absorb sunlight on both sides, with tracking technology that shifts each panel throughout the day to capture the sun’s energy.

Spark Infrastructure chief executive Rick Francis says this is an exciting milestone for the City of Sydney, and the regional communities playing an increasingly critical role in the State’s energy supply.

“This project has not only delivered clean energy for Australia’s largest city, but represents a significant investment in the Wagga Wagga community and Riverina region, anchoring the region’s role as a future renewable energy hub for New South Wales,” Rick says.

The Sapphire Wind Farm near Inverell is the largest wind farm in NSW, with a 270MW capacity generated by 75 turbines that stand 200m high. Partly owned by CWP Renewables, CEO Jason Willoughby said the company was proud to support the City’s renewables program.

“Wind is a natural energy choice providing a much needed alternative to fossil fuels. We hope this inspires other councils and organisations to follow the City of Sydney’s lead,” Jason says.

With so much focus moving toward renewable energy, it only seems natural that other major cities will follow suit.

“If just 20% of the market could follow in these council’s footsteps, this would support investment in 11GW of new renewable projects.”

Leading the way with digital