The first part of this series described how heat stems from current in a resistive element, and how faults can cause fires. George Georgevits now outlines some cases.

Over the years, I have investigated a diverse range of electrical fires.

The PVC insulation will burn when heated and emit toxic fumes (including chlorine gas). However, PVC is not an accelerant – once the source of heat is removed, it will not sustain a fire.

An electrical fire can be caused by arcing between two conductors or by the heat from ohmic losses in a high-resistance joint.

Indoor mains wiring originates from some form of switchboard, and each conductor is connected to a protective device (fuse or circuit breaker) by means of a screw terminal.

If this screw terminal is not tightened sufficiently, it will constitute a high-resistance joint. Under a high current load, such a joint will heat up and can be a source of ignition.

Protection devices that plug into a switchboard can also fail and burn if the socket they plug into does not make a good contact. 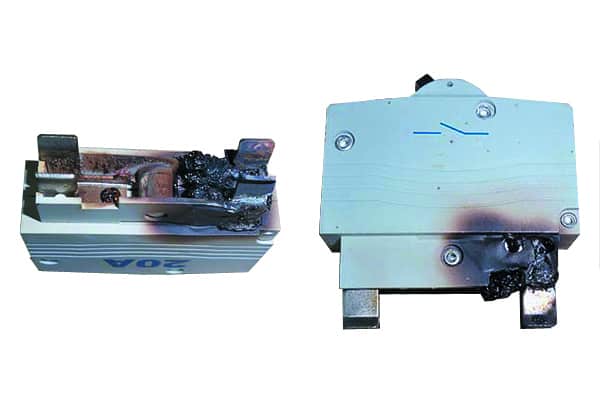 A plug-in circuit breaker that has caught fire due to a high-resistance joint.

I have encountered many cases of a tunnel terminal, used for terminating the cable at the rear of the power point, has not been correctly tightened.

Under heavy load (eg: a clothes dryer) the high resistance caused by the loose joint has caused the cable to heat up and catch fire. This can spread to timber in the wall and cause serious fire and smoke damage to the house.

Similarly, power points and power boards can suffer internal mechanical damage through abuse. One or more of the socket contacts can become splayed and may no longer make a low-resistance contact when a power plug is inserted.

If the load happens to be a blow heater or hair dryer, the plastic constituting the plug and the socket can melt and eventually cause nearby combustible materials to ignite.

Ceiling-mounted halogen downlights operate at very high temperature. For ventilation and safety, the Wiring Rules specify clearances from adjacent timber. If ceiling insulation covers such a fitting, it will prevent ventilation and may constitute a fire hazard.

This type of lighting has been known to cause roof fires if not installed correctly, if ventilation has subsequently been obstructed, or if associated power supply components have failed (eg: step-down power transformer or ballast).

Halogen downlights are being replaced by far more efficient and cooler-running LED designs.

It operates from DC and employs a low-voltage source (usually 12V or 24V). By necessity, the source (the battery) has to have a very low impedance in order to operate the starter motor.

To deliver enough power to the headlights or ignition system, the operating currents are generally much higher than those in domestic mains circuits. Because of this, vehicle wiring systems do not tolerate faulty connections or unfused short circuits.

Some time ago I examined a European sports car that had caught fire while being driven. Fortunately, the vehicle was close to the workshop where it was usually serviced. The driver made it to the workshop and the battery was quickly disconnected.

(NB: With any form of electrical fire, the first action is to disconnect the supply.)

Inspection of the fire-damaged area in the engine bay revealed that the fire was associated with wiring supplying one of the electric radiator fans (this car had two).

Closer inspection of the fan revealed that one of the push-on spade connectors was only half mated. The high-resistance joint caused by this defect generated enough heat to melt the wire’s plastic insulation and subsequently cause ignition.

The incident occurred while the vehicle was idling in traffic on a hot day. The fire started when the fan thermostat cut in and quickly spread to nearby plastic parts in the engine bay. The driver was lucky to make it back to the workshop.

In another case, I was called upon to inspect a fire-damaged semi-trailer.

The driver had been travelling at high speed when he noticed the smell of burnt plastic in the cab. He pulled over as quickly as he could, but the cab had filled with acrid smoke. He left the vehicle to burn, fearing for his safety. Had he disconnected the battery, the damage would have been much reduced.

When I inspected the prime mover, it was obvious that the fire had started in the engine bay.

Inspection of the wiring remnants revealed a short length of heavy gauge wire that was connected directly (ie: unfused) to the positive supply rail on the engine bay firewall. The other end of this wire was just a melted blob of copper.

The wire seemed to have been added after the truck was built, probably to supply some form of aftermarket accessory.

Unfused wiring like this is a bad idea. A short circuit to the chassis can create a very large fault current that will quickly melt and burn away the wire insulation. It will keep on supplying heat until the wire eventually melts and the circuit is broken, just like a fuse.

In this case, I calculated that the wire could readily carry more than 500A before melting.

In all likelihood, the fire started when this wire rubbed against part of the vehicle’s hot chassis until the plastic insulation was worn away, thereby creating a dead short to the chassis.

The 270Ah battery could easily supply many hundreds of amps. The wire would have glowed white hot before melting. All nearby plastic parts would also have caught fire. 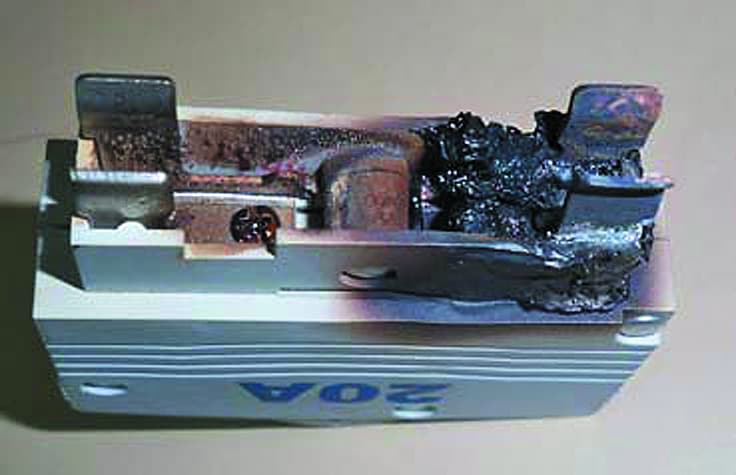 One inspection involved a new, unoccupied house that had caught fire.

The damage appeared concentrated around a run of fixed mains cabling containing six or so cables inside a plasterboard wall.

Part of my brief was to advise whether the fire was electrical, whether the wiring complied with the Wiring Rules, and whether it might have been damaged by another trade after installation.

The burn pattern indicated the fire was associated with electrical cables passing through a hole in a stud. The wiring could not have been damaged after installation, as any such fault would have tripped the relevant circuit breaker.

The damage appeared most severe near one of the studs, and was much worse for a ~100mm length along a particular cable. Most peculiar!

A neighbour said the fire had started during a violent thunderstorm, soon after a very loud thunderclap.

In my view, lighting had struck the roof, followed the sarking and stud down the wall and arced across to the mains cable, thereby burning away the insulation on that one cable. The breaker for that circuit (and only that circuit) had tripped.

DAVID HERRES: Give ’em a break