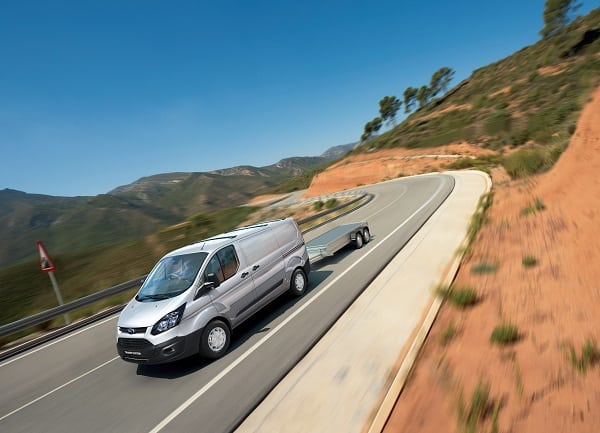 Ford has introduced a long-awaited automatic transmission for its Transit light-commercial vehicle range, with the six-speed unit combining with a new 2.0L EcoBlue turbo-diesel engine on both the short-wheelbase Transit Custom and heavier-duty longer-wheelbase Transit model lines.

The current sixth-generation European-bred Transit has been on the Australian market since early 2014, relying on a Euro 5-compliant 2.2L Duratorq TDCi turbo-diesel engine – developing 92kW/350Nm in the front-wheel-drive Custom one-tonner and 114kW/385Nm in the rear-drive Transit two-tonner – that combines with a six-speed manual gearbox.

The RWD Transit continues with this combination across the 350L LWB (mid and high roof), 350E Jumbo (single and dual rear wheel) and 470E cab chassis (single and double) variants.

However, the new Euro 6 2.0L engine brings with it a front-drive application for the bigger Transit in the 350L LWB vans (both roof heights), and is now the only engine available on the front-drive-only Custom van, which is sold in 290S SWB and 340L LWB variants.

Despite the downsizing from 2.2L, the 2.0 EcoBlue has a higher output in both its Transit and Custom applications, producing 125kW/405Nm in the Transit and 96kW/385Nm in the Custom. The six-speed auto is standard on the bigger Transit but optional on Custom, which also pairs the new engine with a six-speed manual gearbox.

As well as the extra output, Ford’s official combined cycle fuel consumption figures – which may not correlate with real-world results – improve by 11% with the engine changeover, dropping as low as 6.4L/100km on Custom, depending on the variant. The previous equivalent 2.2L variant managed 7.2L/100km.

The powertrain upgrade also heralds a number of other updates, such as the 2.0 EcoBlue vehicles coming standard with a ‘side wind stabilisation’ system that automatically applies the brakes to keep the vehicle on course if the van is hit by a sudden crosswind or turbulence created by a large truck.

These variants, which are identifiable by a chrome insert added to the front grille, also feature an upgraded 4” TFT colour multifunction display screen, while carryover models make do with the previous 2.4” LCD dot matrix screen.

Other technology options have arrived for the Transit range, including a City Nav Pack, while all models benefit from a larger reversing camera that is now located on the audio screen rather than in the rear-view mirror.

Transit Custom now has full wheel covers (rather than hub caps) and the option of dual side doors and a rear liftgate door.