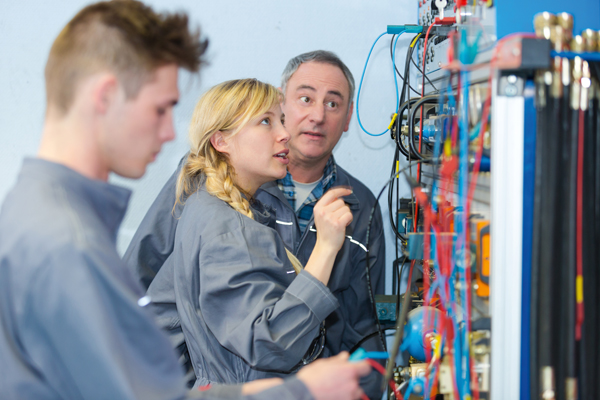 Trade training should be a national aim, not a matter for political point scoring. James Tinslay outlines the NECA approach.

We are all aware of fake news, industry crises and ‘end of life as we know it’ scenarios.

Even if you ignore social media (I try hard) we have media outlets of whatever persuasion presenting whipped-up stories about change and disruption.

We are also all aware of the ‘mom and apple pie’ Americanism regarding warm and fuzzy issues that go to the core of community and family. It is in that context that apprenticeships are often mentioned.

Most readers of this magazine will agree with this approach, because they were apprenticed as youngsters and went on to become tradies, supervisors, managers or business owners.

Recently, when one of the political parties began promoting the idea of 100,000 free apprenticeships, it hit the headlines across the country. I imagine that many people were nodding in agreement.

However, it was mainly spin. The proposal was almost entirely based on the existing New South Wales system. Apprentices in NSW – in some cases employers – that cover the cost of training are reimbursed provided the various training milestones are reached.

Many of those young people entering an apprenticeship do experience an opportunity cost regarding wages in the initial years, but the result is longerterm stability and higher wages.

The use of apprenticeships for political point scoring can be annoying, but it is not necessarily bad for the industry. However, political parties need to consult with industry on an ongoing basis, and not just before elections.

Female participation has become a major talking point in all sporting codes but it has been something of a sleeper in VET.

To boost understanding and participation, NECA has developed the ‘Women in Electrical Trades Roadmap’ to offer strategies for greater recruitment and retention of women in electrical trades.

The roadmap tackles false assumptions and myths, such as women not being ‘wired’ for inflexible trade conditions or dirty and physically demanding jobs.

Females now make up almost 10% of trade apprentices and trainees, and in many cases are doing better than the males.

Group training employers make up an important sector in supplying electrical apprentices to industry, and NECA has a presence in every state doing just this.

All of them have programs aimed at the recruitment and retention of women. The number of female apprentices is still modest, but there is a focus on scaling it up because of the high success rates achieved.

All of this indicates there is no crisis in electrical apprenticeships, only challenges – such as the lower skill levels of school leavers, especially in science and maths.

The notion of going to university in order to get a good job is now largely debunked. A large number of graduates cannot find a job, let alone a well-paid one.