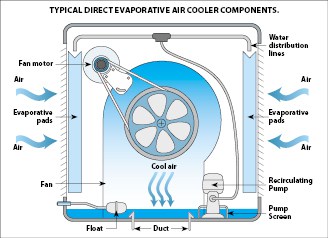 To anyone thinking about buying an evaporative cooler, the advice is … don’t.

These units offer poor performance and inefficient cooling, and they are expensive to uninstall.

Evaporative cooling is primitive and outdated. It has been superseded by fast, efficient reverse cycle air-conditioning based on the technology that runs the kitchen fridge, which reliably keeps our food from spoiling.

Evaporative cooling is common due to heavy marketing by the two or three companies that are heavily vested in it.

About 20% of households in Victoria have a unit, and about 60,000 units are sold each year.

These systems are less common in Sydney, where it is generally accepted that they don’t provide the level of cooling required for coastal suburbs.

Some units are still being installed in the marginally drier western suburbs.

The performance of evaporative coolers varies depending on daily fluctuations in temperature and humidity, and the level of maintenance.

They can sometimes make occupants feel a bit cooler, but most of the time the atmosphere is muggy, with high humidity beyond the accepted comfort zone.

How it works; why it doesn’t

Evaporative cooling adds lots of moisture to the outside air, then pumps that air at high volume through the dwelling.

Generally, for the effect to be perceivable, the outdoor air needs to be below 30% relative humidity (RH).

RH indicates the amount of moisture in the air at a given temperature. As air gets warmer it can hold more moisture; as it gets cooler it can’t hold nearly as much.

RH is the difference in readings between two mercury-filled glass thermometers: one exposed to the open air (dry bulb), the other wrapped in a wet wick (wet bulb).

An evaporative cooler can effectively operate only when windows and doors are open, thereby introducing a security risk.

Any work that has been done to upgrade the building envelope is compromised in an extreme way.

Insulation and weather sealing is wasted. Instead of having consistent insulation over ceiling areas where the evaporative registers are located, there is a big ‘thermal chimney’ in each room.

Occupants are directly exposed to the varying temperature and humidity outside. This is a particularly important matter in southern states where winter heating requirements are great, and much heat is lost through this ducting-induced thermal chimney.

In places such as Mildura, which has a humidity range of 20-30% on a hot afternoon, it is still hit and miss. Often the outside humidity, coupled with high temperatures, is well above 50% and the evaporative cooling fails to do anything appreciable for the occupants.

The use of evaporative coolers has other downsides, as outlined below.

Fire risk. According to the Fire and Emergency Services Authority in Western Australia, 35 of 70 houses that burned down in a catastrophic bushfire experienced fire that started in the evaporative cooler unit on the roof.

It is estimated that a substantial proportion of the hundreds of houses destroyed in Victoria’s Black Saturday fires had evaporative coolers that ignited under ember attack.

Costly servicing. A unit needs to be serviced at least every two years and the pads replaced every two to seven years. Servicing starts at $200, and parts are usually required at extra cost.

Home security. It is difficult to secure a dwelling with all the doors and windows open, which is mandatory for these units.

Many householders shut up the house in the evening, hoping that their evaporative cooler will work. Without a free air-flow it won’t.

Water leaks. These systems can leak due to pad failure, or neglecting to replace pads early, which results in water damage. There is also substantial risk in having the plumbing connections above your lounge room.

Mould and damp. This can result from using an evaporative cooler, as the indoor humidity rises to 80%.

It is a similar scenario to mould growth in the bathroom or shower when the exhaust fan has not been turned on.

Furthermore, the Victorian Government states that evaporative coolers can cause swelling to doors, doorframes and furniture.

Installation. Often there is not enough care taken to seal the perimeters of ceiling vents. Coupled with an ineffective damper, or no damper at all, this negates the building’s thermal envelope. Householders will pay much more for winter heating.

An air pressurisation test of 12 houses was conducted by the building performance company Efficiency Matrix. It showed that 40% of total building air leakage can be attributed to conventional evaporative coolers and 20% to the more expensive units with a damper.

Space. Evaporative coolers are bulky and take up valuable space on the roof that would be far better allocated to solar panels.

A badly placed evaporative cooler can block up to 3kW of the potential of a continuous solar panel array. This is equivalent to 30-50% of a household’s annual electricity needs.

A quality Japanese reverse cycle air-conditioner can pay for itself, because it not only cools but also heats.

Heating with a reverse cycle unit can be as much as 22 times cheaper (using your own solar energy without exporting any to the grid is the best case) than with gas systems, which can lose about half their heat to the atmosphere.

The United States Department of Energy, California Energy Commission and Sustainability Victoria estimate the running cost of an evaporative cooler at half that of a reverse cycle air-conditioner in cooling mode.

However, such claims are misleading, as they compare evaporative coolers with poor performing air-conditioners rated at half the efficiency of the best modern units.

When an evaporative cooler is compared with a Daikin Ururu Sarara (US7) or other air-conditioners rated at six or seven stars, the energy consumption is about the same, but the cooling performance of the Ururu Sarara is far superior. It achieves the desired temperature set point that you dial up on the remote and gives you the required level of humidity for optimum comfort.

The US7 split system delivers a comfortable and cool environment – not one that makes you feel as though you are in a sauna.

US7 is modular, so as many indoor units as needed can be installed and used as you wish. For comfort the optimum level is 20-24ºC and about 50% humidity.

On a 40ºC day with 50% humidity, as is common in Melbourne, the best an evaporative cooler will do is 34ºC and 80% humidity. This is well outside the comfort zone.

Psychrometry deals mainly with the mixture of water vapor and air due to its application in heating, ventilation and air-conditioning, and meteorology.

For more information have a look at these video clips, which explain psychrometric charts: