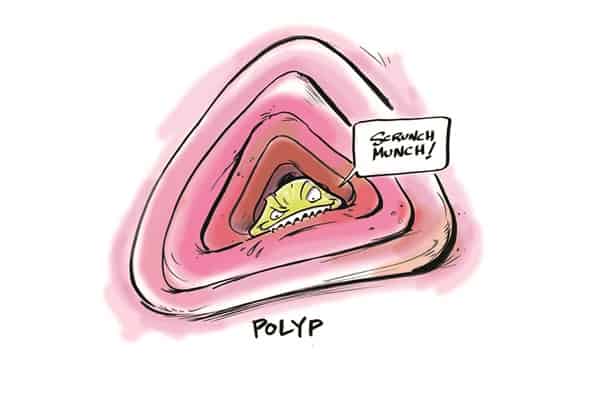 What puts you at risk of developing bowel cancer?

Firstly, the older you get the more at risk you become. The age of 50 tends to be set as the age at which risk increases, although bowel cancer can occur in the 40s, especially in smokers. Smoking increases your risk of bowel cancer. I have my own rule that some sort of a bowel check-up should be done on my patients when reaching the big five zero, and earlier if other risk factors exist.

Secondly, if there is a history of someone else in your family developing bowel cancer then you are a lot more at risk. The closer the relative; the higher the risk.

The third major risk factor for bowel cancer is the presence in your bowel of little bits of tissue called ‘polyps’. They protrude into the bowel from the inside lining and are bombarded with the good and the bad things that we eat. Most bowel cancers come from these polyps but not all polyps become cancerous. It is a matter of finding out if you do or don’t have them. There are generally no symptoms attributable to them so you require a bowel check of some kind to try to find them. This will either be a poo test known as a Faecal Occult Blood Test (FOBT) or a colonoscopy which I will expand on very soon.

Another risk factor for bowel cancer is a low-fibre diet which is more a part of Western society. Bowel cancer is rarely seen in countries such as Africa where fibre intake is quite high. Fibre seems to be protective by increasing the transit speed of bowel motions through the bowel and hence keeping the contact time of cancerous chemicals against the bowel wall to a minimum. Fibre is found in whole grain cereals and bread, as well as beans, lentils, fruit and vegetables. And don’t forget about a good fluid intake. And that doesn’t mean alcohol! In fact, recent studies show an increased risk of bowel cancer with excessive alcohol consumption. A plus on the lifestyle side of the equation is that exercise reduces your risk of bowel cancer.


What are the symptoms of bowel cancer?

Altered bowel habit: This is predominantly constipation or being clogged up, but I have seen some patients present with persistent diarrhoea as they had become blocked up and then the poo has turned to mush and seeped around the outside of the hard bowel motions.

Pain: This can be felt anywhere in the tummy so any persistent abdominal pain should be checked out as well.

Tiredness which is due to anaemia or thinness of your blood: This is a fairly common presentation. The cancer can slowly leak small amounts of blood which may not be visible and with time the blood count slowly drops and along with it, your energy levels. Please get any unexplained tiredness checked out.

Unexplained weight loss: The cancer may silently chew away at you from the inside so keep a regular eye on your weight.

What tests can be done to detect bowel cancer?

The least invasive test is the FOBT (Faecal Occult Blood Test). Currently there is a National Bowel Cancer Screening Program using the Faecal Occult Blood Test. The test picks up the presence of small amounts of blood which may come from polyps or cancers already there as the poo bangs into them causing little blood vessels to bleed. It involves catching a poo sample and jabbing a little stick into it and then sending it away to be analysed. This Government-backed program only targets men (and women) at 50, 55 and 65. A lot can happen in 5 years! It can also be done at any time through your GP via the normal pathology laboratory.

It’s not a bad test but there can be false positives (blood is present but no cancer or polyp exists) or false negatives (cancer or a polyp is present but no blood detected). It is estimated that this test reduces the death or mortality rate by about 20%. If blood is found, it doesn’t mean that there is cancer or a polyp but it then requires further testing to be done in the form of the more invasive test, a colonoscopy. This will require you to be referred to a specialist called a gastroenterologist or colorectal surgeon.

A colonoscopy requires a light general anaesthetic as a long snake-like instrument with a camera on the end is passed up your backside and wiggled along the entire length of your large bowel. It sounds horrible but the worst part is the process of cleaning out your bowel before having it done. The cleaner the inside of your bowel, the easier it is to detect problems inside the bowel. It’s like having a grenade thrown in! You will have to take a lot of laxatives on the day prior to having it done and spend most of it on the loo. With the type of anaesthetic used for colonoscopy now, you will hardly know that the procedure has been done. The value with this procedure is that if there is a polyp or even cancer present it can be removed totally or at least biopsied and sent away for testing to see what further management is required. You will probably be sent back to your GP to get the result of the biopsy.

If cancer is present you will be referred to a colorectal surgeon for definitive treatment such as surgery. If a polyp is found then further surveillance will depend on what type of polyp it is. If it is found to be a hyperplastic polyp then no further surveillance is required. You may want to consider a colonoscopy every 10 years to be sure or else have a regular FOBT done. If it is an adenomatous polyp then these are possible precursors for bowel cancer and thus should be followed up regularly with a repeat colonoscopy in the near future, such as one to three years’ time.

If there is a family history of colon cancer then I wouldn’t mess around doing FOBTs but rather get a colonoscopy done at around 50 and then be guided by the results of that. Generally, most gastroenterologists have excellent recall systems for this.

Stay happy and healthy and I hope you had a joyous Christmas and New Year.