DAS: Host for the most 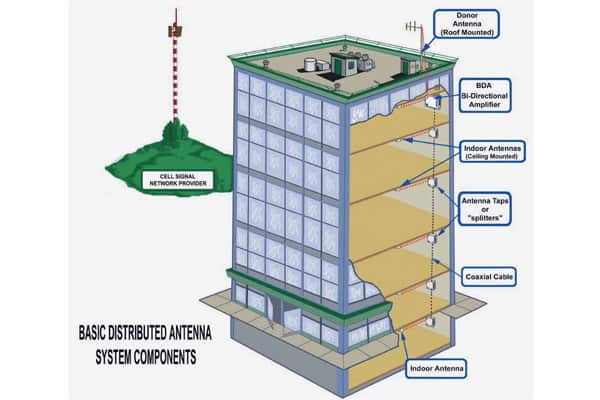 A distributed antenna system (DAS) can be an effective solution to dead zones in city ‘canyons’, large buildings, stadiums, railway stations and airports.

To this end, service providers are assessing the distributed antenna system (DAS) to create the necessary small cells.

DAS technology has been around for years, but there has been considerable innovation in recent times. DAS solutions not only fulfill the need for small cells, they also provide efficient backhaul.

What is a DAS?

Tony LeFebvre is director of product management for outdoor wireless products at the US company TE Connectivity.

He explains that a DAS is a system of managed hubs and remote antennas that distributes a wireless signal to multi-band, multi-technology radio heads.

At the head-end of the DAS, mobile service providers typically locate base stations to provide the cellular signal. A main hub takes the signal, digitises it and distributes it to other hubs and radio heads via a high-bandwidth fibre optic network.

At the antenna, the radio converts signals from digital to RF and RF to digital.

By digitising on the fibre, Tony says, a DAS can transport the mobile signal at full strength to any remote antenna, no matter how far away from the main hub and base station.

Given a seemingly insatiable demand for bandwidth, the cost of installation and maintenance is rising rapidly, thereby putting stress on existing delivery models.

It is often not possible for several telecommunications carriers to deploy their own infrastructure due to appearance or space limitations. In any case, such multiplication would certainly be expensive.

This makes it desirable to have one system to support all carriers that want a presence, but the question of DAS ownership raises its head.

Bob Reid, who heads his telecomms consultancy Reid-Net Pty Ltd, is an advisor to builders and building owners.

At a meeting of the Cabling Advisory Group, Bob explained that carriers have been pushing the line that owners should pay for the installation and maintenance of a DAS.

“The argument from carriers is that a DAS will enhance a building and make it more attractive as an A-grade proposition for tenants,” Bob says.

“It was mainly Telstra in the early days, but other carriers are doing it now. It may be a reasonable commercial line for them, but I have a different take on it.

“A DAS will make the carrier’s network function better in a building, thereby benefiting its own mobile customers. Why should the building owner spend anything up to $1 million to support the carrier?

“It’s the carriers that make the rules here, allowed by the legislative framework established decades ago. Whatever happened to the ‘user pays’ principle?

“As it stands, builders are picked on individually. They need some united way of dealing with carriers.”

Owners of large building and venues, naturally preoccupied with their main business, are generally not equipped to manage the health and performance of a wireless network.

When it comes to owning the infrastructure for communications services, venue operators take considerable risks, overestimating their ability to maintain and upgrade the necessary systems for providing optimal service to their customers.

The risks inherent in the venue-owned models can discourage carriers from putting up money for infrastructure. Carriers see each venue from a revenue perspective and each carrier has a formula for assessing potential returns.

There are several models of carrier ownership, and they each have consequences.

If there is a lead carrier it may not let other carriers provide a better service. This can be done by limiting radio power resources for others.

If there is consortium ownership the bureaucracy can bedevil every aspect of decision making.

The answer is to have an independent expert on the venue’s side to ensure competition, maximised revenue and the best service for customers.

Barney Tomasich is CAG chairman and business development manager at Anixter Australia, a global supplier of communications and security products, electrical and electronic wire, and cable.

He has assessed the overseas experience and says ‘neutral hosting’ could be the answer to issues arising from DAS installation and maintenance.

In this model a third party provides one shared system, offering quality of service and other benefits to property owners and carriers. The initial investment and ongoing maintenance costs are recouped over several years.

“We’ve had quite a bit of experience assisting customers with passive infrastructure for DAS installations,” Barney says.

“We haven’t noted any neutral hosting in Australia yet, so the carrier still holds sway. Some people thought they had it, but when we looked into the situation it was not the case. However, we have encountered people looking for neutral hosting.

“Unfortunately, developers have not understood the DAS concept in the first instance, then when it came to the crunch they balked at the cost.

“One developer was advised that a DAS was needed but decided against it. A major client moved into the building. On day one people pulled out their mobiles, then exclaimed ‘What’s going on?’

“We were called back to do an installation, which naturally cost more than it would have at the start.”

Barney says a DAS is essential for commercial buildings. However, the need is also there for apartment blocks, given the decline in fixed-line telephones.

“Most of the high-rise apartments appearing in the bigger cities are not what you would call premium. Anything above, say, 20 storeys should have a DAS, otherwise someone could die in an emergency because of poor mobile coverage.

“I can foresee the day when government will make coverage mandatory in high buildings.”

Designing and maintaining a DAS can be challenging, as performance is affected by several factors.

This field is not easy: it takes talent, various disciplines, many skills and plentiful resources. Independent DAS operators can rely on funding and relationships with carriers. Good operators know what they are doing with neutral hosting, offering high performance and the ability to keep customers happy.

Operators can be profitable and make it look so easy that smaller integrators think they are able to do the same. But operators have invested heavily in building their systems and are backed by a pool of engineers, business managers and lawyers.

The advantages of this model are as follows:

However, there are some downsides to the DAS operator model that are apparent, and others that are not.

It takes direct control, administration and decision making out of the hands of the venue owner and carrier.

Implications for the form, function and potential for service add-ons are not so clear and at the operator’s discretion, meaning the venue owner is subordinate on matters concerning the network infrastructure.

The operator has a lot of power over carriers and venues, leading to other drawbacks such as difficult system reconfiguration, service add-ons or adjustment once the system optimisation is complete and approved.

Like any business, a DAS operator is focused on its bottom line, and its interests may not align precisely with the venue or the carrier. The operator can be likened to a landlord in this regard.