Features
Home›Features›Covering the risk of bushfires

Covering the risk of bushfires 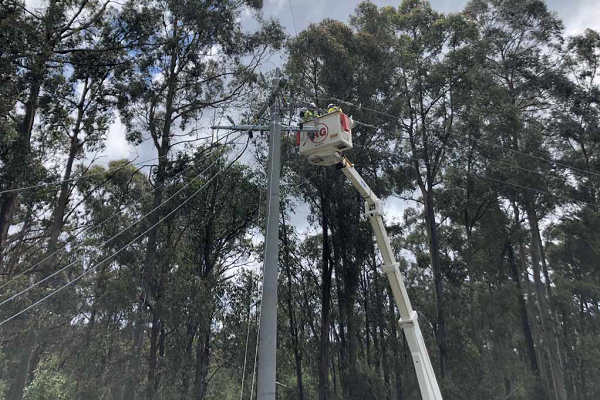 By replacing existing bare wire with covered conductors, utilities can minimise the risk of bushfires. Amokabel Australia managing director Steve Rutland explains how the technology is scaling up to combine safety with cost-efficiency.

Even though there’s a relatively low likelihood of arcing or sparking on any single span of power line, these events could cause bushfires,
which represent a major risk to the public, farm animals and wildlife. Sparking and ignition can happen when a live power conductor comes into contact with vegetation or trees if a pole fails or a branch falls. Alternatively, lines can clash in high winds, creating sparks that may ignite dry grass or vegetation after falling to the ground.

And the risk is likely to grow, driven by climate change. According to the government’s State of the Climate report in November 2020, we’re now experiencing hotter and drier conditions than ever, particularly in the south of the country. In addition, the fire season is growing longer and more intense.

It’s no surprise that utilities are keen to control fault currents or put in place a physical barrier to protect lines from the elements and from each other. At the same time, it’s essential to maintain supply to customers. There are a number of technologies that are
currently being applied to combat this risk.

One of these is the rapid earth fault current limiter (REFCL) device. It can be deployed at substations to monitor the network constantly. If the device detects an earth fault current on one phase of a three-phase line, it will immediately open the circuit to stop feeding current to the fault. At the same time, it will maintain or boost supply to the other phases, ensuring that customers receive a continuous and unbroken power supply.

The REFCL approach has the disadvantage that it does not protect against phase to phase faults – for example sparking from clashing lines
or when a tree branch causes a short circuit after falling across multiple lines. In addition, because it is designed to detect earth faults, it can’t achieve the same protection for customers served by the country’s 200,000km single wire earth return (SWER) network. These drawbacks limit the potential applications for REFCL devices.

The second option is undergrounding. As it requires extensive trenching, this is relatively costly and can present practical challenges in rocky ground. However, it completely removes the risk of ignition and can therefore be very attractive for lines running through high-risk bushfire areas.

A study by the Commonwealth Scientific and Industrial Research Organisation (CSIRO) has found that covered conductor reduces bushfire
risk by 98%. It can be delivered at a quarter of the cost of undergrounding or even less, depending on the ground conditions. This makes it the most cost-effective solution for bushfire mitigation from electrical lines. It also boosts safety for the general public in urban areas, and for wildlife in more rural settings.

And with a design life of 45 years, it will provide a similar lifetime to bare wire. Therefore, it makes a lot of sense to upgrade when replacing time-served lines, especially in bushfire risk areas.

Specially for the Australian market

Covered conductor has been used for many years around the world. For example, Scandinavian countries need long power lines to supply remote communities in heavily forested areas. Without covered conductors, falling trees and branches would cause regular interruptions to service. They are also used in the Middle East to protect critical power lines from corrosion and erosion in sandy, hot and salty conditions. They’re also used in India to protect members of the public and elephants from bare conductors.

However, the use of covered conductor in Australia has been limited as it previously relied on heavy-duty material as the protective insulation around the conductor. That made lines significantly heavier than bare wire, meaning that utilities had to upgrade their poles as well as the lines. In addition, installation was trickier due to the manual handling of the heavy cable.

Although other forms of covered conductor are used elsewhere, amokabel developed a special type for Australia in partnership with electrical engineering consultants Groundline Engineering. This was possible thanks to the support of research funding established by the Victorian State Government following 2009’s Black Saturday bushfires.

Groundline Engineering director Ian Flatley says that the environment in Victoria is particularly harsh: “We have high ambient temperatures in some areas, as well as low temperatures in some rural and mountainous regions. We also have extremely strong UV exposure that the insulation material needs to withstand.

“The insulation material also needs to cope with abrasion that may take place when the wind rubs a line against a tree branch or tree trunk. That’s a bigger problem for us than in other countries as our trees have adapted to the climate by developing bark that is extremely tough.

He adds that they chose amokabel as a partner due to their experience and flexibility to help their customers.

“They worked with us to develop a new covered conductor with three layers. A semi-conductive inner layer provides flexibility, and a high-grade electrical insulator forms the middle layer,” he says.

“Lastly, a tough polymer material is used as the outer layer to withstand mechanical abrasion as well as UV radiation from the intense sunlight.

“We then delivered an extensive programme of testing at Swinburn University to check for resistance to UV, abrasion and mechanical testing. It met or exceeded all the requirements under Australian and international standards, as well as project-specific requirements.”

Having completed the product development in 2016, initial trial sections have been in operation for five years. We’re now seeing the number
and scale of projects grow as utilities make progress in implementing the recommendations set out in the Black Saturday Royal Commission.

United Energy was the first utility to install our covered conductor on short sections to confirm its suitability for the network. With support from Groundline, it installed lengths of around 100m in Mordialloc and Cape Schanck.

With this experience under its belt, United Energy delivered further spans in the Arthur’s Seat area of Melbourne’s Mornington Peninsula. Dense vegetation in this area means that it is home to some of the longest spans in the utility’s network, at 270m and 330m. That elevates the risk of conductors clashing in the wind, with potential for sparking and ignition of bushfires in the wrong conditions.

And in May 2021, Powercor completed the upgrade of a total of 43km of overhead line with covered conductor near Geelong and Bendigo.
Seeing demand grow, we saw an opportunity to improve value for money, reduce lead times and provide added value for utilities. To achieve
this, we’ve now set up a subsidiary in Australia with the aim of establishing local warehousing. This new local office will enable us to deliver economies of scale, faster response times and better customer service.

As a result, covered conductor is now even more cost-effective for utilities that want to protect the public from the risk of bushfire from electrical grids.

Minamata Convention on Mercury to be ratified ...