Balls up on supplements 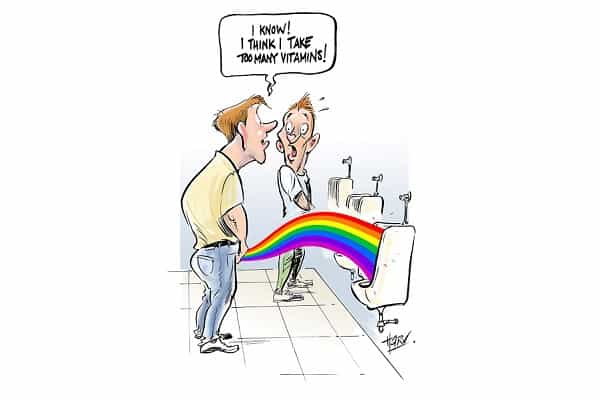 The recent controversy over the use of banned supplements in the NRL and AFL highlights a growing problem amongst sports people trying to gain an edge or success with means other than talent and good old fashioned hard training. The term supplement has also taken on a new meaning. I was always of the opinion that it only involved extra nutritional aides that may top up micronutrients such as vitamins and minerals missing in our diet. It now seems to include drugs, be they growth promoters or stimulants. A win at all costs attitude must pervade to push the limits. Yes, sport is now big business and those in elite competitions are always striving to achieve the ultimate in success but not everyone can be a winner.

The public loves winners but they don’t want someone to win by cheating. Nobody likes to feel deceived. I’m of the opinion that the person who finishes last in the Tour De France (when it is clean) is still a magnificent athlete. To be able to ride 3500km up and down those mountains at such a speed is nothing short of amazing. However, there are those who inanely suggest that finishing second is the first of the losers. This approach is very sad to me.

I was involved at the elite level as doctor of the Hawthorn Football Club in the AFL for 15 years and a lot of products were passed under my eyes for scrutiny. None involved hormones but nearly all were useless from my perspective. I remember relenting on a general multivitamin from a well-known vitamin manufacturer which perhaps assisted some players with dietary issues but all it did with most was increase the colour of the urine flow from Glenferrie Oval to the sewer treatment plant at Werribee. At least the players had something to take. Some would be assisted and no harm occurred to those that weren’t.

There were well meaning people who thought that their product may help the club but there were also those whose main goal was to make money, and as they say, money is the root of all evil. Where a lot of the products come from and circulate widely is in gymnasiums and the nutritional health industry. I’ve looked on plenty of websites and found it interesting to note that a lot of the products available today were around and pretty useless in my heyday. The only difference being the increase in price now. They will certainly make you weigh less – by lightening your wallet!

If a product can be promoted as assisting the success of an elite athlete or team, especially in the area of bulking up and increasing strength and speed, then there will be big bickies for the distributor in other areas such as sales in gymnasiums, health food shops, health clinics and online sales. But if it actually works then I would be very suspicious that in some way it is either increasing testosterone or growth hormone and is banned or probably should be.

The buzz word has been peptides! Peptides are effectively a releasing factor that indirectly stimulates the secretion of testosterone or growth hormones which are the natural hormones that we have in us to promote muscle growth and recovery. This is still illegal and dangerous as I will allude to when talking about side effects. Blokes going to gymnasiums aren’t drug tested and a lot of doubtful products (from my perspective) are flaunted there – doubtful in their efficacy or doubtful in their long term safety. They are often promoted as ‘natural’. If you bulk up due to a supplement then beware – dependency can occur and once you stop taking it the effect will go away. You will revert back to how you looked before taking the drug. Some people are under the impression that they can take these drugs for a few months to achieve long term gains. They’re wrong. Patients of mine have even been offered ongoing maintenance hormonal supplements… crazy!

SIDE EFFECTS
The side effects are scary. Excess testosterone means big muscles but also small balls. The testicles are the factory for testosterone production so when supplements are used the body shuts down its own natural production and hence the shrinkage of the testicles. Small balls aren’t great for fertility either. The blood thickens and blood clots are more prevalent. This may lead to strokes. The cholesterol level starts going up and the risk of heart disease increases. And what’s this: my pectorals are bigger but I have boobs! Moobs or man boobs are common as some of the excess male hormone is converted into female hormone and as such stimulates breast growth.

And I thought I was over this issue – acne, at my age! Yep, I look alright from the outside but from the inside I’m not so hot. I’ll throw in an increased risk of liver cancer and I hope you will say ‘why bother’. The best way to naturally get your testosterone level up is to get your body weight and fat levels down and that means controlling your food intake, having adequate calories or kilojoules to fuel your exercise program and of course training hard.

VITAMINS AND MINERALS
If you look at the various definitions put out by scientific/nutritional and public health organisations for vitamins, there is a common theme across a couple of issues. Firstly they all say that they are required in small, very small or miniscule amounts to do their job. This belies the huge industry that churns out massive amounts of pills to Australians to the tune of nearly two billion dollars per year (and increasing). And this is happening in a country known as ‘the land of plenty’ whose main nutritional problem is one of excess rather than one of deficiency.

Secondly, by definition, most vitamins are generally obtainable in sufficient quantities from the diet. Sufficient being the key word! Obviously a poor diet or impaired access to healthy food affects the availability of some vitamins but there is a perception, encouraged by the vitamin industry, that a normal diet can’t give us what we require for various reasons such as food storage, preservation and preparation issues. Don’t forget our fast paced lifestyle affecting our food choices and necessitating the need for supplements over whole food. Disease prevention is also stressed and vitamins are heralded as a weapon in this endeavour. As a GP I question the need for the magnitude of vitamin and supplement usage in our community. I think it is largely the worried well that take a lot of these supplements based on fairly flimsy evidence and as I said, the urine flowing down our sewer pipes to Werribee is perhaps overly nutritious and expensive.
There are legitimate nutritional deficiencies caused by disease that require supplements. The main micronutrient deficiency issues I would see in General Practice would relate to iron deficiency (poor intake, poor absorption or blood loss), Vitamin D deficiency (lack of sunlight) with reduced Calcium absorption, and Vitamin B12/folate deficiency (poor intake or poor absorption due to auto-immune disease). I am happy to recommend targeted vitamins in these instances. These vitamins and minerals are the ones we can easily blood test for and monitor levels.

At times there can be uncertainty if a patient has a specific vitamin deficiency as not all can be tested for. So this has resulted in general multi-vitamins being taken or recommended. I have done this in certain instances but I would never recommend a continual usage. My logic here would be that a bottle of multi-vitamins may top the individual up for a possible deficiency but continual usage could lead to an excess of certain vitamins, particularly the fat soluble ones which could stay in the body and lead to a hypervitaminosis (excess vitamin state) as well as a reduced bank balance.

The other unknown and potential problem with getting vitamins and minerals via pills is the bioavailability. This refers to whether or not it actually does what it is supposed to do without being ensconced inside whole food. Whole food carries with it a lot of other chemicals, co-factors etc. that probably assist the vitamin to get to where it is needed and then work properly. That is why, as a doctor interested in nutritional medicine, I would much prefer that the vitamins be obtained from the diet as I am sure they must be better absorbed and then better utilised by the body. I admit that I take a fish oil supplement on a daily basis. Am I convinced one hundred per cent that it is doing me good? No, but from what I have read of the pros and cons, for me and my medical conditions (heart disease and arthritis) I think that the benefits outweigh the risks. Although, I am well aware of a recent study showing a possible increased risk of prostate cancer in fish oil users. You can’t win!

PROTEIN POWDERS
And what of those protein supplements that the young blokes are taking? There is a belief in the body building fraternity that protein is required in large amounts to build large muscles. There is a fair bit of scepticism amongst doctors and dietitians about this. I have experienced the sight of a huge plastic tub of protein powder taking up a massive amount of space in our already crowded pantry – complements of one of my sons.

I remember reading a very good article by a dietitian many years ago who had a sample of the protein supplements analysed. The conclusion was that the concoctions were basically glorified versions of skim milk powder with some additional missing proteins added. That is fine from a health perspective but it is the cost of these products that I would question. By far the best dietary source of protein from a quality perspective is an egg white. Egg whites are the gold standard of protein quality and contain all essential amino acids required by the body. Incorporating a couple of these in a skim milk based banana smoothie would be a good way to start the day and would be a lot cheaper.

There are also some health issues with overuse of protein supplements. Protein is not a good fuel as it mainly has a structural role within our body. Sugars and fats are best used for energy. If excess protein is taken and not utilised then it can be converted to fat and weight gain may become a problem. The other big problem is kidney disease. The excess protein has to be broken down and the breakdown products put a great stress on the kidneys and kidney failure can result. For everyday living, the normal diet has well and truly enough protein in it to survive so supplements are generally not needed.
Finally, there are legitimate uses of testosterone and growth hormone to replace deficiencies. Testosterone levels reduce with age and can be a cause of ill health in our latter years and supplements in this area can greatly assist quality of life. But the dosage is closely monitored and any side effects minimised. I will cover this important area of Mens Health in the next issue of ManSpace.

CEFC to invest in CCS technology