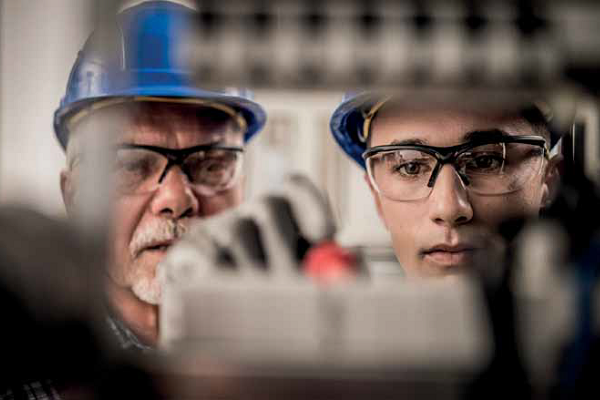 James Tinslay provides an update on the state of trade apprenticeships, safety and training amidst COVID-19.

With three months between columns for Electrical Connection there is ample potential to read the published edition and with the advantage of hindsight wish some predictions or comments were not made.

In the Spring edition, I referred to the calls to have JobKeeper extended an extreme view. Well, with COVID-19 still a major health issue for Australia and particularly Victoria in August when this
piece was written, extending JobKeeper is certainly not extreme and has been adopted by the Morrison Government. I may keep my predictions to myself!

There is however an update on the dire apprenticeship position with a research report from the Mitchell Institute of Victoria University reporting that national apprenticeship vacancies had plunged from 1731 in January to 468 in April.

The numbers did increase in May to 687, but the outlook is still poor. The research also estimates that without intervention there will be 130,000 fewer apprenticeships and traineeships from
the start of the pandemic to June 2023. They predict that this will potentially lead to skill shortages, lasting up to eight years. Staggering numbers.

Over the past few decades, there has been a much-increased focus on workplace safety and none more so than in the electrical industry.

I have spoken before about the emphasis on mentoring and supervision of apprentices, so it is worrying that some recently released disciplinary action reports from the Electrical Safety Office in Queensland show disregard of fundamental electrical safety provisions.

This is not to imply that Queensland has any more issues than any other state, but I commend the publication of the outcomes of their Electrical Licensing Committee disciplinary actions.

Two of the cases involved reversed polarity and incomplete mandatory tests which resulted in both the electrical worker and the property manager receiving shocks. In both cases, licenses were suspended with a competency test to be undertaken and fines attributed to the poor work.

In two other cases exposed unterminated conductors were left live, resulting in an adult and a young child receiving potentially fatal electric shocks. Suspensions and fines followed once again.

As discussed previously, supervision of apprentices is not a cut and dried formula and the same can be said about mentoring. Some electrical workers do not want that role and others are incapable of carrying out such a role.

At the very least these parameters should be taken into account:

Where reinstating power to a circuit on which an apprentice is working fits into those parameters is incomprehensible as it is a 101 of electrical work, apprentice or no apprentice.

Within the last few years, NECA has developed a course targeting tradespeople who assume the role of workplace mentors and supervisors of apprentices. Responsible electrical contracting businesses need to ensure they have competent supervisors or seek assistance if unsure.

The power of hot water