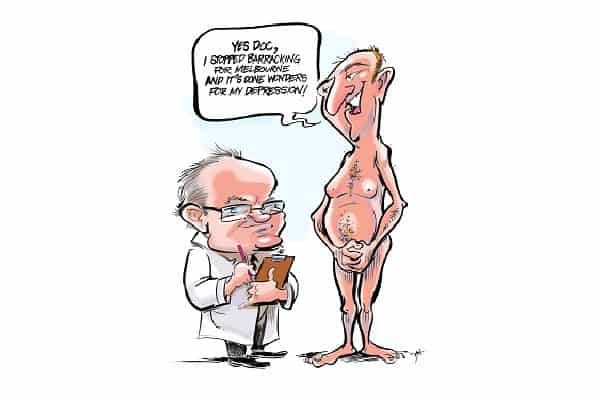 We all experience ups and downs in our moods and very few people go through life on a consistently even keel. Life events challenge us on a daily basis and we are all different in the way that we handle them. The string on our bow is set at different tensions from individual to individual and our capacity to deal with unhappy life events may vary. You are allowed to be down in the dumps in an unhappy situation. To be happy in an unhappy situation is just as abnormal as being depressed and down for no reason. It is when that lowered mood persists that depression sets in. Depression is a mental illness characterised by a persistently lowered mood.

The overall incidence of depression in the community is about 20%, with females having a bit more depression than males. Males perhaps would have less again if they followed the female lead and talked about their problems a bit more rather than keeping them bottled up inside. Suicide is the dreaded end result of severe depression and, disturbingly, the suicide rate is three times higher in males than females although more females attempt suicide. Unfortunately blokes are better at it, which is one thing that I would prefer we weren’t.

Now we largely talk of major depression which may be mild, moderate or severe. Minor depression would equate with emotional depression, or a feeling of being down but only for a short period of time. Once that period of time goes beyond two to four weeks then major depression should be considered. It doesn’t mean that you must be put on pills, but you should consult someone about your feelings to bring it out in the open. That someone may be a partner, friend, family member or health professional.

Bipolar Disorder is a specific form of depression which is interlaced with episodes of mania – hence the old term manic depression. At times the person seems to be on a high or manic; they are super productive and are on the go all the time. However, this never lasts very long and soon the roller coaster heads downwards and they are in the depths of despair. Unfortunately the downs are far more prevalent than the ups. The highs equate with talent and great creativity but the lows can lead to self-destruction.

There is definitely a genetic tendency which results in depression running in families. Alcohol and illicit drug intake have also been implicated. Alcohol depresses brain function and often depressed people imbibe in it to blot out all the unhappy things perceived to be happening. This further exacerbates the condition.

There are certain medical conditions such as diabetes and thyroid problems which may lead to depression as well as medications such as some blood pressure and cholesterol lowering pills, some antacids, cortisone, anti-inflammatory pills and even some antibiotics.

Sometimes there is no cause other than an extremely unhappy event in your life which is either ongoing or can’t be forgotten and continually plays upon your mind. The very nature of life itself throws up these events, but some people get too much of their fair share. We are all different with respect to our personalities and some personality traits such as being shy and introverted, a perfectionist or a worry-wart, perhaps pre-dispose some more to depression, But I have also seen the most gregarious and confident people succumb. Such is the nature of the beast – or the Black Dog as it is often called.

What are the symptoms?

What do blokes feel like when they are depressed? Depression affects his mental capacities as well as his physical wellbeing. There may often be physical symptoms such as excessive tiredness, recurrent headaches or back soreness together with sleep difficulty; both getting off to sleep and waking early and then not being able to get back to sleep again. With this, thoughts go round and round in his head and there is a pressure of thinking. Sexual problems may be occurring such as erectile disorder or a complete lack of interest in sex. Mentally, the mood is flat, but frustration may ensue and anger and irritability surface.

Interest is lost in normal pleasurable activities such as eating, sport and hobbies. Weight loss may happen. His appearance no longer matters so grooming deteriorates. He may withdraw from family and friends and work becomes a chore and absenteeism may begin. The bed becomes a haven from the cruel outside world. Out of character violence due to frustration may occur towards the spouse or children.

Tears are not common in men but their presence indicates that he is near rock bottom and suicidal ideation may be present. An element of anxiety adds incessant worrying with the furrowed brow look, as well as restlessness, jitteriness and irritability. A sense of extreme worthlessness ensues and self-denigrating thoughts begin. I always worry when a profoundly depressed patient suddenly seems better for no reason – he may have made up his mind to suicide and is now contented that the correct decision has been made. Intricate planning may then occur.

Treatments
Psychotherapy – Psychotherapy basically means ‘talking therapy’, and talking therapy is the cornerstone of all treatment for depression. It may be unstructured such as a heart-to-heart talk with a mate or family member and the extreme importance of such a simple act cannot be undervalued. Just the fact that the issue is out on the table can bring great relief and a lifting of the mood. The troubles of the world are not wholly and solely in the sufferer’s domain now. They are still there but at least others know of the problem. And it can be quite surprising to find out how others close to the affected person have been through similar problems.

When people are depressed, minor problems become amplified and irrational worrying over things that aren’t really very important occurs. You need someone to point these things out to you and talk you through the important issues. This is where professional counselling can be of great assistance. This can be done through a number of health professionals such as a psychiatrist, a psychologist, a psychiatric nurse or counsellor. Your GP can sort out who would be the most appropriate person to see. There are now government-funded mental health programs that enable the cost to be minimised through Medicare and, once again, your GP is the person who can sort this out for you.

It will be up to the particular mental health professional to decide which form of therapy is right for the individual. One that is commonly and successfully used for depression is called Cognitive Behavioural Therapy or CBT. Cognition is thoughts and behaviour is actions. When a bloke is depressed his thoughts become very negative. Any good is pushed aside and the negative/bad thoughts are amplified. The cup looks half empty rather than half full. Thoughts affect behaviour and good actions such as exercise and socialisation diminish. The role of CBT is to get you thinking in a positive way in order to rid yourself of self-depreciating thoughts. This will have a positive effect on your actions which in turn further assists your thinking, and you will gradually claw your way out of the deep mire.
But sometimes the mire is too deep and the thought processes are incapable of being altered by psychotherapy. In order to get benefit from it, the person must become engaged in the process. This engagement requires active participation in various activities of the therapy and with major depression this may not be possible until medication has had its time to lift a bloke’s mood to a level where talking therapy will help.

Medication – From a simplistic perspective, the mode of action of anti-depressant medication is to increase chemicals in our brains called neurotransmitters which connect the brain cells to each other. Every thought is actually a chemical reaction going on inside our brain. Brain cells communicate via these neurotransmitters travelling through the space between the nerve and brain cells. It is thought that excessive thinking and worrying, particularly repetitive bad thoughts, reduces these chemicals in our brain over time which leads to depression.

The two main chemicals in our brain that are implicated the most are Serotonin and Noradrenaline as these are the ones particularly involved with our emotions. Low levels of each are implicated in specific symptoms with some overlap of others. The slowing symptoms such as excessive tiredness, loss of interest in pleasurable pursuits, poor concentration and general malaise are thought to be more due to Noradrenaline problems, while a lack of Serotonin is implicated more in emotive feelings such as worthlessness and suicidal thoughts. Anti-depressants increase either or both levels of these chemicals in the brain.

It probably is too simplistic but by whatever mechanism they work, the various anti-depressants are very useful in the management of depression, particularly major depression. They are however, not the be-all and end-all of treatment and must be thought of as an extra tool in the overall management.

Side-effects, particularly early on, are not uncommon. Fortunately, most of the side-effects are relatively short-lived. Some patients however, find the side-effects intolerable and have to stop the medication. Sometimes it is worthwhile trying a different anti-depressant. It is important to note that it may take at least two to four weeks before the medication starts to have a beneficial effect. From a side-effect perspective, the anti-depressants may upset your stomach, causing nausea and loss of appetite and sometimes, diarrhoea. Headache is not uncommon, as well as dizziness. As the chemicals build up in the brain, anxiety symptoms such as nervousness, sweating, dry mouth and agitation may occur.

How long do you need to stay on anti-depressants?

It is important to stress that the anti-depressants can take two to four weeks to have an effect. And by that, I mean a positive effect, as sometimes the side-effects may start straight away. I recommend giving them a try for at least four to six weeks to see if they help. Often your doctor will have started with a low dose anyway in a hope to minimise the side-effects and that dose should be reviewed after two to four weeks. If there is a positive response then I would recommend staying on them for at least 6-12 months. You will need to be reviewed regularly until stabilised.

Some will take them for a short while, think that they are not right for them and stop them and not get back to their doctor. At least let the doctor know about this.

Some will require life-long medication. This is hard to predict. The only way of telling is to see what happens when the medicine is gradually withdrawn at a time in the patient’s life when they think life is stable. Can I stress the word ‘gradually’. And never, never, never just stop taking your medication suddenly, particularly if you have been on it for a while. You will probably feel dreadful because of the acute withdrawal response. Your brain will have got used to the level of neurotransmitters in the brain and anything less will make you unwell. If you want to come off them, then plan to gradually reduce the dose over a minimum of a month, and preferably longer. Importantly, discuss this with your doctor.

Other treatments
There are also a lot of alternative and complementary treatments for depression such as meditation, yoga, relaxation therapy and even acupuncture. I have an open mind about these therapies and if they help, well and good.

There are two excellent websites for further reliable information about depression. Firstly there is the Black Dog Institute at www.blackdoginstitute.org.au, and secondly, an organisation and a website I use and recommend quite frequently, beyondblue at www.beyondblue.org.au.

The main message regarding depression is to…..Talk to someone!

Using your gait to power and secure ...