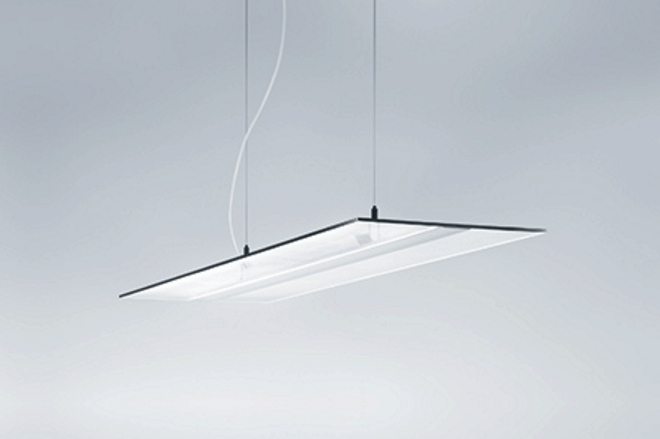 Zumtobel has released the VAERO LED pendant luminaire which incorporates itself unobtrusively into the architecture of modern office environments.

With the aid of special technology, the light is evenly spread from the luminaire centre to the edge – for a pleasant distribution of light and a harmonious room atmosphere.

The new generation of employees works digitally and in a networked manner – sometimes independently and sometimes as a team and generally at any time, in any place. This places new demands on contemporary working environments. Modern workspaces support this new method of working, for example with different work areas for different requirements – such as co-working spaces, team rooms, quiet zones or individual offices. To suit this flexible working environment, Zumtobel has designed the new VAERO LED pendant luminaire, which, thanks to its clear, minimalist and discreet design, can be integrated into very different office areas and almost any room architecture – whether a classic working environment or a creative communication zone.

The secret behind the VAERO design is the focus on essentials. A transparent light-emitting surface, clear, straight lines and the elimination of the converter box on the ceiling characterise this minimalist design. Thanks to the special lighting technology and the particularly narrow and low centre bar, the housing remains extremely slim and the wings form a clear edge. In addition, the luminaire body is designed without a frame, with the aid of special cladding. In this way, this graceful luminaire remains discreetly in the background and integrates itself seamlessly into the room architecture.

When switched on, VAERO looks like a super-slim, almost hovering, evenly-illuminating light disk. When switched off, however, it appears no less elegant, as the transparent light guide panel is almost transparent. Aligned to the minimalist appearance of modern workspaces available in special colour shades.

It is only the invisible qualities of its ultra-modern technology that permits the unique design of the VAERO. The pendant luminaire features innovative side-lit technology. Here the LED light in the light sources is uncoupled in the transparent light guide panel and distributed evenly from the centre to the edge. Individual LED points of light are dissipated with the aid of defined structures. The result is a homogeneous illumination of the light-emitting surface without the formation of stripes. The direct/indirect lighting and the wide indirect light distribution create a balanced brightness distribution and reduce contrasts – this improves the visual comfort, above all in generously-sized large-area offices. This effect is further reinforced through excellent glare control, which is particularly important when working at a display. These different components ensure a pleasant lighting atmosphere within a room and thus increase the well-being of the employees. Perfect lighting quality and the long lifetime of the luminaire are guaranteed by the new-generation LED modules. The new VAERO thus not only fulfils the maximum demands on visual comfort, but also on the efficiency of modern office illumination.

One of the requirements of modern office lighting is the dynamic adaptation of the lighting to daytime, different visual tasks and individual needs. For this reason, during the development of new lighting solutions, Zumtobel pursues the “Active Light” approach, according to which the lighting is adapted in a target-orientated manner on the respective preferences of the user and the changing room situations. According to a Zumtobel study, most people prefer in offices an individually controlled and colour temperature adjustable LED illumination with a proportion of direct and indirect light. Based on this knowledge, Zumtobel will be launching a further VAERO generation in spring 2017 featuring the tunableWhite technology – as response to the user requirements for an adaptive, customisable light.